This week Atlético Ottawa had the pleasure of hosting the captain of Canada’s Indigenous women’s soccer team to discuss the second National Truth and Reconciliation Day as well as soccer within the local region’s First Nations communities.

Victoria Marchand is a mother to a young boy, studied nursing and a Canadian Gold Medal winner from the 2017 World Indigenous Games – a global competition that brings together over 2,000 Indigenous athletes from around the world to participate in a wide array of sporting events.

Born in Gatineau, Victoria started playing soccer at the age of four, before eventually becoming one of the select few players outside of Western Canada to be picked to play for the National Indigenous Football Association (NIFA) in 2015. Her bow at the World Indigenous Games, however, would have to wait another three years as she completed her studies at uOttawa whilst putting in stand-out performances on the field for the GeeGees.

Like many great success stories in the world of sport, her pathway to captaining the Canadian side in Alberta and bringing home a gold medal was anything but straightforward, as she explained to Atlético Ottawa’s captain Drew Beckie. 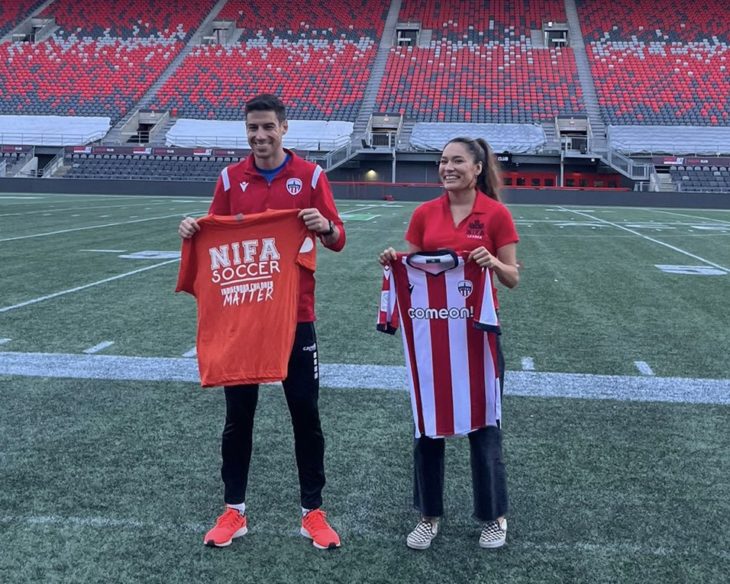 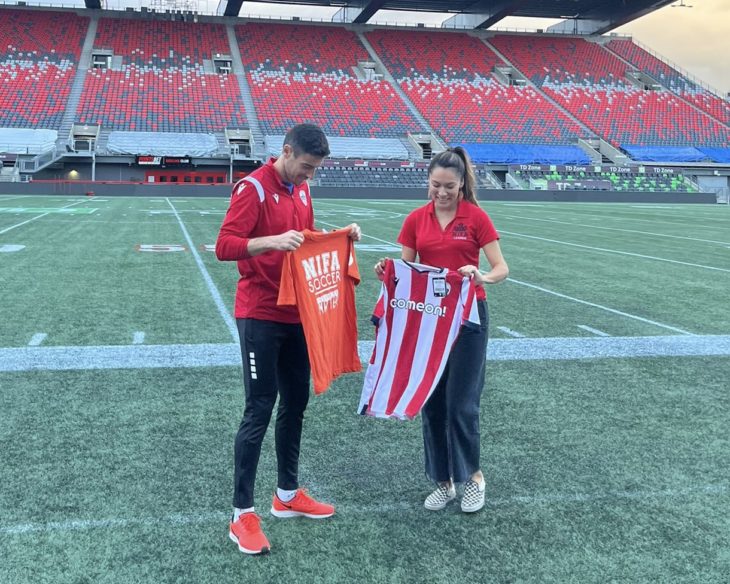 “Don’t quote me,” she jokes after revealing her cherished token from Canada’s neighbours. “It’s because the only soccer player I knew was Mia Hamm because of television and exposure. If we can get more exposure we can inspire young Indigenous children of all genders to be able to play any sport.”

Ottawa captain, Beckie, spent over an hour showing Victoria around the training facilities at TD Place as they discussed the region’s history, opportunities in sport and pathways to their respective heights in the game in a “special conversation”.

“It’s something that opened my eyes to the needs of a community that isn’t funded at all,” said the 31-year-old. “Listening to their struggles and how we can be better here, to provide opportunities to the indigenous community that is so needed and deserved.

“Equality is what we want to bring here at Atlético, anyone can come to a game or have an opportunity to play for this club, that’s the ultimate goal.”

As well as playing, Victoria takes time out of her schedule to run training camps for the children from the Algonquin Communities and will even lead the U-19 Boy’s team at the 2023 North American Indigenous Games. According to the gold medalist, when it comes to tackling systemic racism in the game “grassroots is such an important approach” with a focus on simple but effective solutions.

“There is so much room for Atletico Ottawa to join this beautiful community,” she said. “We could invite some kids from our community to watch a practice for 30 minutes or go to a dinner where they get to meet a coach.

“There aren’t many that make the jump from recreational, you have to come to Ottawa in order to be competitive and even then there are cultural barriers. I remember no one wanted to be my partner one-on-one, being visibly racialized.

“I hope that my son, when he engages in soccer or any sport, he can see me as a role model and someone who is thriving.”

National Truth and Reconciliation Day is an opportunity for those who live in Canada to listen and learn from and about Indigenous Peoples’ history, in particular, related to residential schools where “children were forcibly taken away from their communities, their families and their homes”.

“It’s such a sensitive subject, people are afraid to make mistakes, and that’s ok but we aren’t going to learn without mistakes,” said Victoria. “We need to not be afraid of making mistakes but be willing to be accountable for them and think ‘what am I going to do when I make a mistake’.”

For more information on Truth and Reconciliation day, MMIWG2S+ as well as events taking place in the capital region – click here.