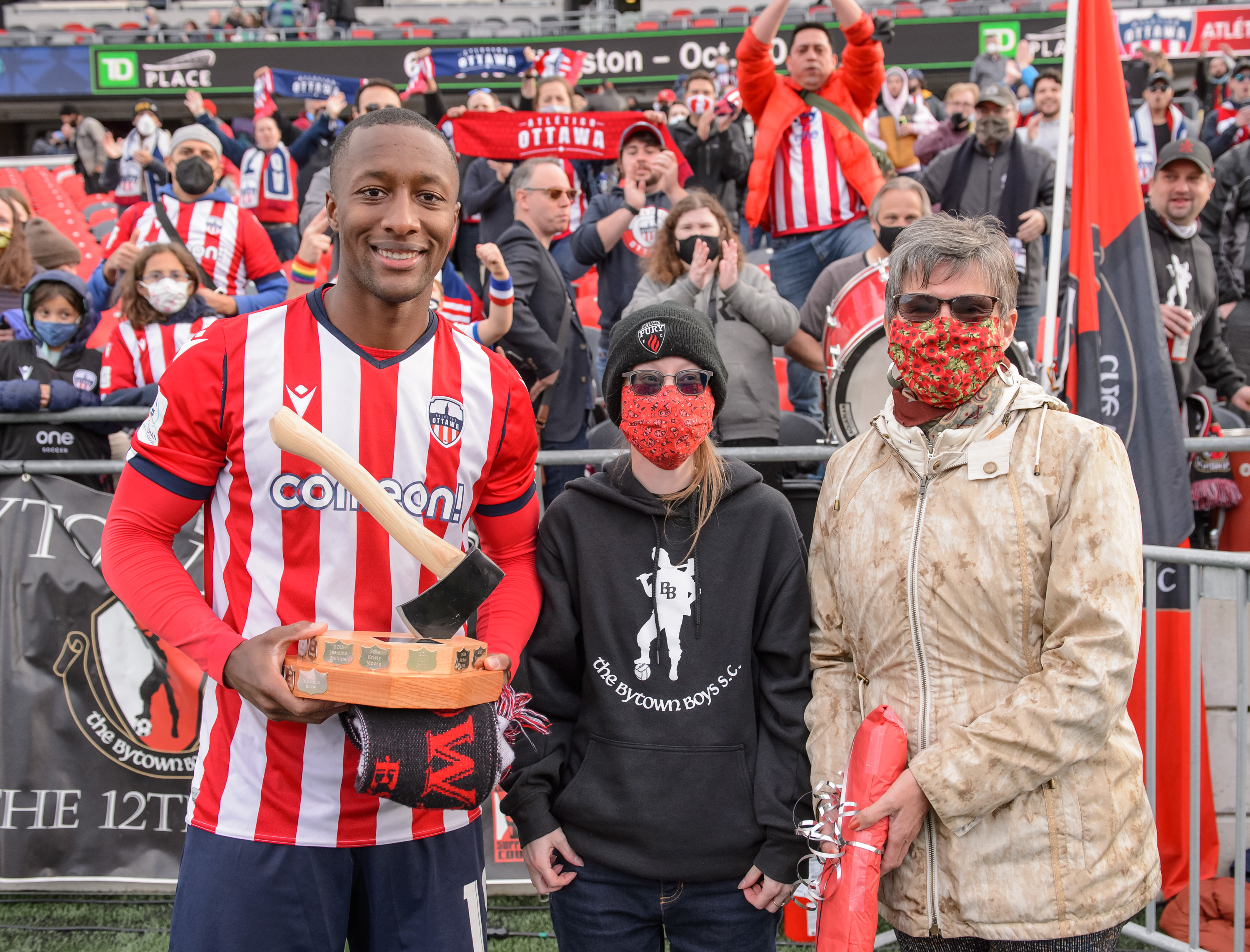 Can we just take a second to acknowledge the vibe that our supporters clubs brought this year? They took no days off. A full shift every match from leading all the chants and marching to the match to away game viewing parties. The energy the Capital City Supporters Group and Bytown Boys Supporters Club bring every match should be applauded. Take a bow, folks!

Both groups end the season with handing out some hardware, so here is a Q&A with to get you up to speed on the Terry Merrick Memorial Trophy from the Bytown Boys and the Golden Scarf from Capital City Supporters.  Please meet Jessica from BBSC and Daniel from CCSG…

Atleti: Tell us about the award and where it came from?

Jess from BBSC:  The idea for the trophy came from always doing player of the year in Capital City days which started 10 years ago. The trophy was talked about in early 2016 for player of the year and at the end of that year a trophy was made. The trophy we present at the end of each year is our second trophy as the original was presented with no explanation and the player kept the trophy. The Bytown boys Player of the year trophy is named after one of our members who passed away almost four years ago. As a group we wanted to do something for Terry Merrick in his memory. Terry was an influential member of our group. He welcomed everyone who showed up to games, and motivated members of the group to push forward no matter what and how the team was doing.

Daniel from CCSG: The most iconic symbol of a football supporter is their scarf. Cherished. Warn with pride. Held high throughout the national anthem and during our clubs finest moments. The Capital City Supporters Group honours this age old tradition by turning the supporters scarf into a symbol of excellence. The Golden Scarf stands alone as a unique award amongst supporter and sporting  citations. Each CCSG Golden Scarf Player of the Year Award is one of a kind.

Atleti: How does one vote or have their say?

Jess from BBSC: The paid members of Bytown Boys have the opportunity to vote a top three for player of the year. It is a ranked system where first gets 3pts, second gets 2pts and third gets 1pt. The points then are added up and whoever gets the most points is then the winner. We give the paid members the opportunity to vote whoever they think is most deserving. In the past we have had mostly keepers and strikers win the award.

Daniel from CCSG: The CCSG Golden Scarf Player of the Year Award is selected from three finalists chosen by fans. Nominations were open for 14 days through our website. After 14 days we tallied up the votes and chose the top three players with the most votes as our Golden Scarf Finalists. Once the finalists are selected by the fans, our Membership Council within our Supporters Group votes on the winner. Thomas, part of the CCSG leadership group penned a piece on the entire process and you can check it out HERE.

Atleti: How can someone thinking about joining your club, get in touch with you?

Jess from BBSC: People can get in touch with us through Facebook and Twitter at Bytown Boys SC. My own personal experience was an old friend invited me to a game and I fell in love with the atmosphere that the supporters group brought. Then, I just kept going to the games. It gives you a chance to meet new people. A few members met through BBSC they have been married for 5 years and have a little girl. When Terry passed away the group showed up to the funeral. BBSC is a supporters group but it also feels like you are family. All are welcome.

Daniel from CCSG: As Ottawa’s newest and most active supporters group we believe that it is the responsibility to help create the best fan forward atmosphere on match day. We aim to reinvent what traditional supporters culture is by creating additional excitement for the club with quality digital content throughout the year for the fans by the fans. Our commitment to the club goes beyond match day as The Capital City Supporters Group is steadfast in doing our part in helping grow the beautiful game and the Atletico brand here in the Dominion City. Join Us!  Get involved, Let’s start new traditions and help grow the game and support Atlético Ottawa! You can be as involved as you like. Making noise and showing your colours on match day or volunteering your skills to help create some of the best fan content in the Canadian Premier League. Step one is to visit capitalcitysupporters.com or follow @CapitalCitySG on Facebook Instagram and Twitter.