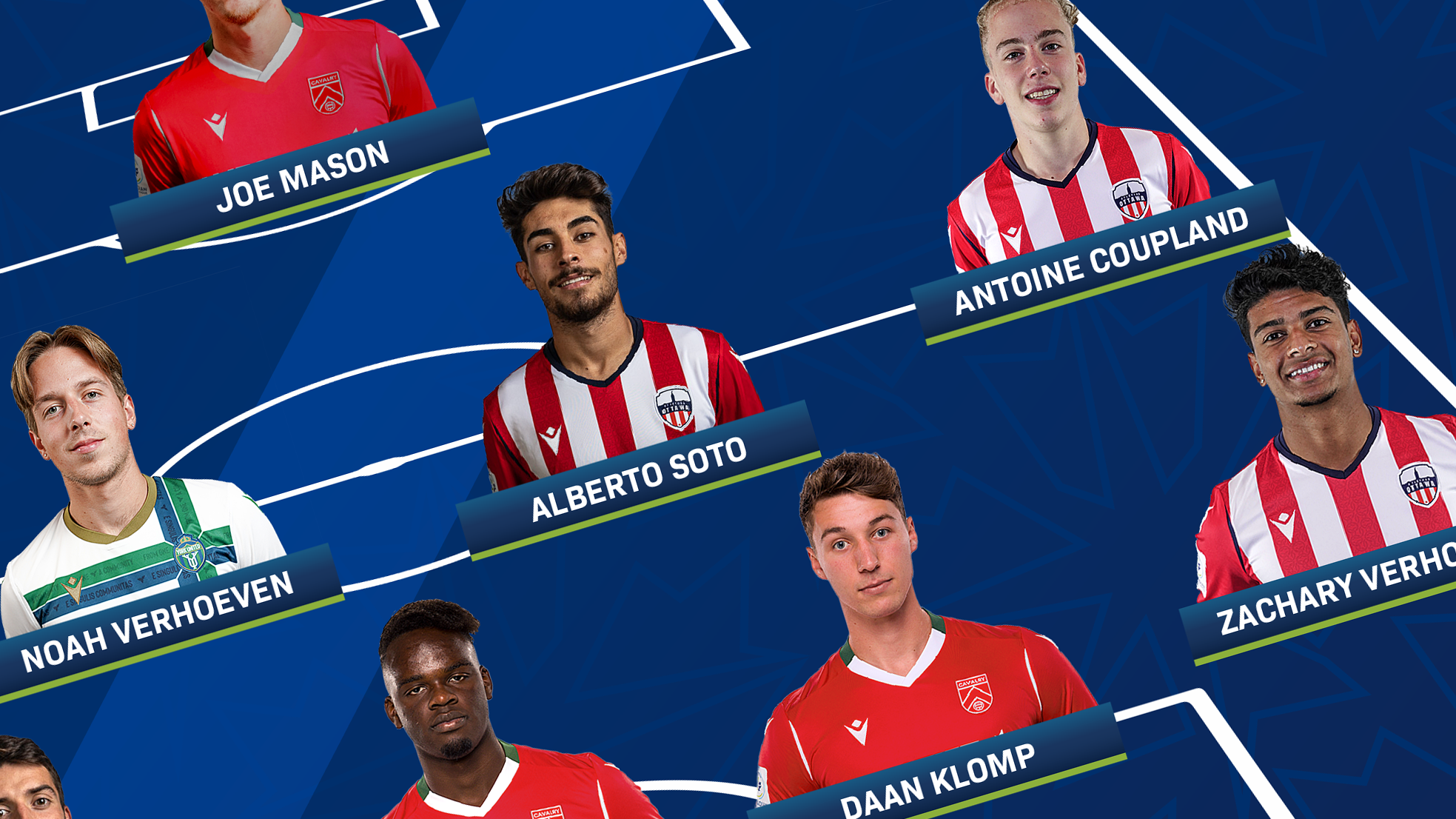 The Gatorade Team of the Week for the 18th week of the Canadian Premier League action in 2021, brought to you by Kristian Jack and OneSoccer’s Oliver Platt.

York United’s backstop was crucial in their 1-1 draw away to Atlético Ottawa. The 28-year-old made six saves on the day and provided a good strong presence in the box, thwarting an aggressive Ottawa attacking group with ease. Ingham also posted a 90.6% passing rate on the afternoon – not bad at all.

Halifax’s brilliant defender was as effective as ever outside of a centre-half position this weekend against Forge FC, taking a left fullback role with ease. The 25-year-old combined nicely with his fellow defenders and grabbed a match-leading five tackles and staggering 16 possessions gained.

Complimented by his fellow wide defender in Verhoven, Miguel Acosta put together another stellar performance this week – further showing how effective Ottawa’s back five has been. Acosta was a pace setter for Ottawa at midweek, making 79 touches, 39 successful passes, and nine tackles to lead his team. Same could be said for a more subdued York match where the Spaniard won all six of his duels and put in a tireless 90-minute shift up the wing.

Yao rather aptly lines up beside Klomp in this weekly XI as the two continue make up a fierce grouping at the back for Cavalry. The CF Montreal loanee was brilliant against Pacific, posting a match-high six tackles and three clearances in the middle of defence.

CanPL.ca’s Player of the Week easily slots in beside his teammate Karifa Yao. The 23-year-old Dutch centreback, who captured the honours for a second time this season, starred in a 2-0 win over Pacific FC where he scored the opening goal, a nice near-post header, before leading his team in interceptions (5), touches (77), possessions gained (9), and won all of his aerial duels.

What a late-season surge from Ottawa’s utility wideplayer Zach Verhoven who collected a staggering three assists on all three goals scored by his side on the week. The former Pacific FC player started with back-to-back second-half helpers against Valour FC — first of which came through a mesmerizing run from his own third to slice a ball to Malcolm Shaw. He threw in another, a deft cross back towards Ryan Telfer, for good measure – one of four key passes on the day. Verhoven also assisted on Antoine Coupland’s opener against York United as he went on to lead the team in touches and duels.

The 28-year-old, whom Tommy Wheeldon Jr. recently called “the signing of the season,” has really begun to thrive on the left side for the Cavs. He was an important attacking catalyst in their win over Pacific FC on Thursday, bringing an element of directness to their game by driving the ball forward and creating scoring chances quickly. Fisk has rapidly become an integral part of the side in Calgary as they start to pick up form ahead of the playoffs.

One of the few bright spots for York in their 1-1 draw in Ottawa on Sunday, Verhoeven continued to demonstrate that he’s one of the most intelligent central midfielders in the CPL. The 22-year-old played in a double-pivot but he roamed quite freely, reading the game well and constantly looking for space to play forward passes into. He made four key passes for York in that game, assisting on Chrisnovic N’sa’s equalizing goal with a superb cross on the second phase of a set-piece. Verhoeven is often the deep-lying talisman for York’s attack, playing the ball into very dangerous areas and covering a lot of ground himself in doing so.

The Atlético de Madrid loanee showed his quality in Sunday’s draw with York United, playing just behind the striker and looking to create chances in transition for Ottawa. He had two key passes and three shots of his own, and he would’ve scored had he not been foiled by an excellent save from York ‘keeper Nathan Ingham. Soto also won nine duels in the game, both winning the ball and beating defenders one-on-one. He was dangerous in Ottawa’s midweek win over Valour FC as well, playing a team high 20 passes into the attacking half and contributing to some high-tempo attacking play in the first half.

In front of a legion of his friends and family, Coupland put in perhaps his best performance yet for Ottawa in his hometown on Sunday, scoring just his second professional goal and causing a lot of trouble for York cutting in from the right wing. The 17-year-old started both of Ottawa’s last two home matches, and he showed glimpses of just why he’s so highly touted in the Ottawa-Gatineau soccer community. Coupland showed remarkable vision and intelligence with the ball against York (as well as against Valour), and although his goal took a deflection, he did well to read the defenders and continue moving toward the middle of the box before taking a patient shot. He’s a player with a bright future who’s already managed to entertain.

Cavalry’s marquee off-season signing has been appointment viewing in recent weeks; even though he hasn’t actually found the net, he’s been phenomenal in and around the 18-yard box. In 90 minutes against Pacific on Thursday, his hold-up play was terrific; his movement in the box frequently caused trouble for defenders because he’s such a difficult player to track. He’s able to drop deep and look for the ball, as well as remain high to push the defenders and create space in front of the backline for Cavalry’s midfield to operate. Mason