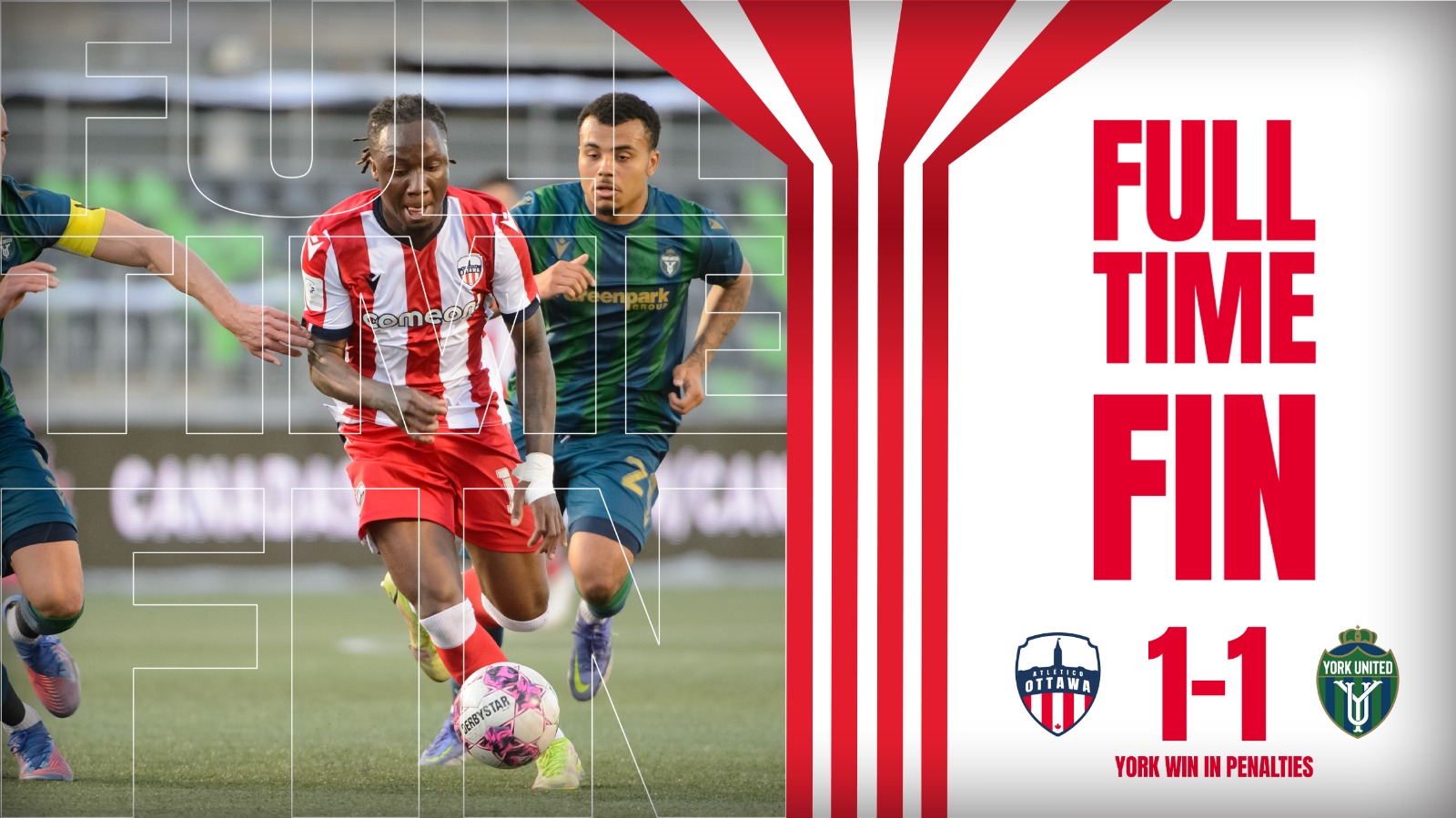 York United is headed to the quarterfinals of the Canadian Championship after a thrilling victory following eight rounds of penalty kicks against Atlético Ottawa. After Ben McKendry sent his effort over the bar, Cédric Toussaint stepped up and calmly slotted his penalty past former York goalkeeper Nate Ingham to seal the win.

Diyaeddine Abzi’s first-half stunner was cancelled out by substitute Malcolm Shaw as the match was tied 1-1 heading into penalties. It is the seventh match in eight meetings between these two clubs that has ended tied after 90 minutes.

After firing 23 shot attempts at the Pacific net on the weekend, Atleti picked up where they left off. Just five minutes in, Ballou Tabla found some space in the York box but saw his shot saved well by Nikolaos Giantsopoulos.

The hero at the weekend for York United, Sebastián Gutiérrez then nearly provided some early magic of his own. He latched onto the rebound of a shot created by hard work from Osaze De Rosario, but could not beat Ingham.

Atlético’s aggressive approach caused York issues early, including a moment of overaggression from Miguel Acosta in the 21st minute. The Ottawa attacker caught Giantsopoulos with his boots as he was taking a goal kick, earning a yellow card.

But while much has been made of Ottawa’s counter-attacking ability this week, it was York’s that opened the scoring. Atlético did well initially to stop a break from De Rosario after he got in behind their backline. But the ball bounced free to Lowell Wright, who calmly played the ball wide to Abzi. Arriving into the box, the York fullback fired an absolute rocket past Ingham.

Vladimir Moragrega wasted a glorious opportunity to tie the game before half-time. A short corner kick from Ollie Basset found Tabla, who made space before himself before delivering a brilliant cross. Unfortunately for Ottawa, Moragrega’s unmarked header was straight at Giantsopolous.

Minutes later, York then nearly doubled their lead off of a corner kick of their own. Ingham’s punch ultimately found its way to Dominick Zator in the box, but the York captain’s effort was cleared off the line brilliantly by Ottawa captain Drew Beckie.

Then it was Moragrega who again caused the Nine Stripes issues, but his first-time touch on a brilliant ball in behind from Max Tissot was again stopped by Giantsopolous, although certainly a little less comfortably this time. The missed chances left the visitors with a 1-0 lead heading into the half.

After a quiet first 10 minutes to start the second half, Carlos González made a pair of substitutions, introducing Shaw and Carl Haworth into the match. The pair would combine just five minutes later to tie the match, as Haworth’s curled cross found the head of Shaw at the top of the six-yard box.

Tabla had a good chance to put the hosts ahead in the 70th minute after he was slipped through to the right of the York box. His low-driven shot to the near post, however, was turned aside by Giantsopolous.

With timing ticking down, York United was dealt a tough blow as substitute Austin Ricci was forced to leave the match with injury. After suffering a major injury in last year’s Canadian Championship, York will be hoping Ricci’s absence will be much shorter this time around.

During the stoppage, while Ricci was given medical attention, the two sides came together near the York bench. York goalkeeping coach Camilo Benzi was sent off for his part in the scuffle.

In stoppage time, Shaw nearly got his second of the match, but Chrisnovic N’sa made a brilliant sliding tackle to deny the Ottawa striker. That would be the final action of regular time, as the two sides headed for penalties.

Almost nothing separated the two sides during 90 minutes, so it is perhaps no surprise that the penalty shootout also went beyond the five shooters.

Osaze De Rosario and Brian Wright both saw their shots stopped, while McKendry’s miss opened the door for Toussaint to seal the victory for the Nine Stripes. They will now head to Starlight Stadium, where a meeting with Canadian Premier League leaders Pacific FC awaits in the quarterfinals.