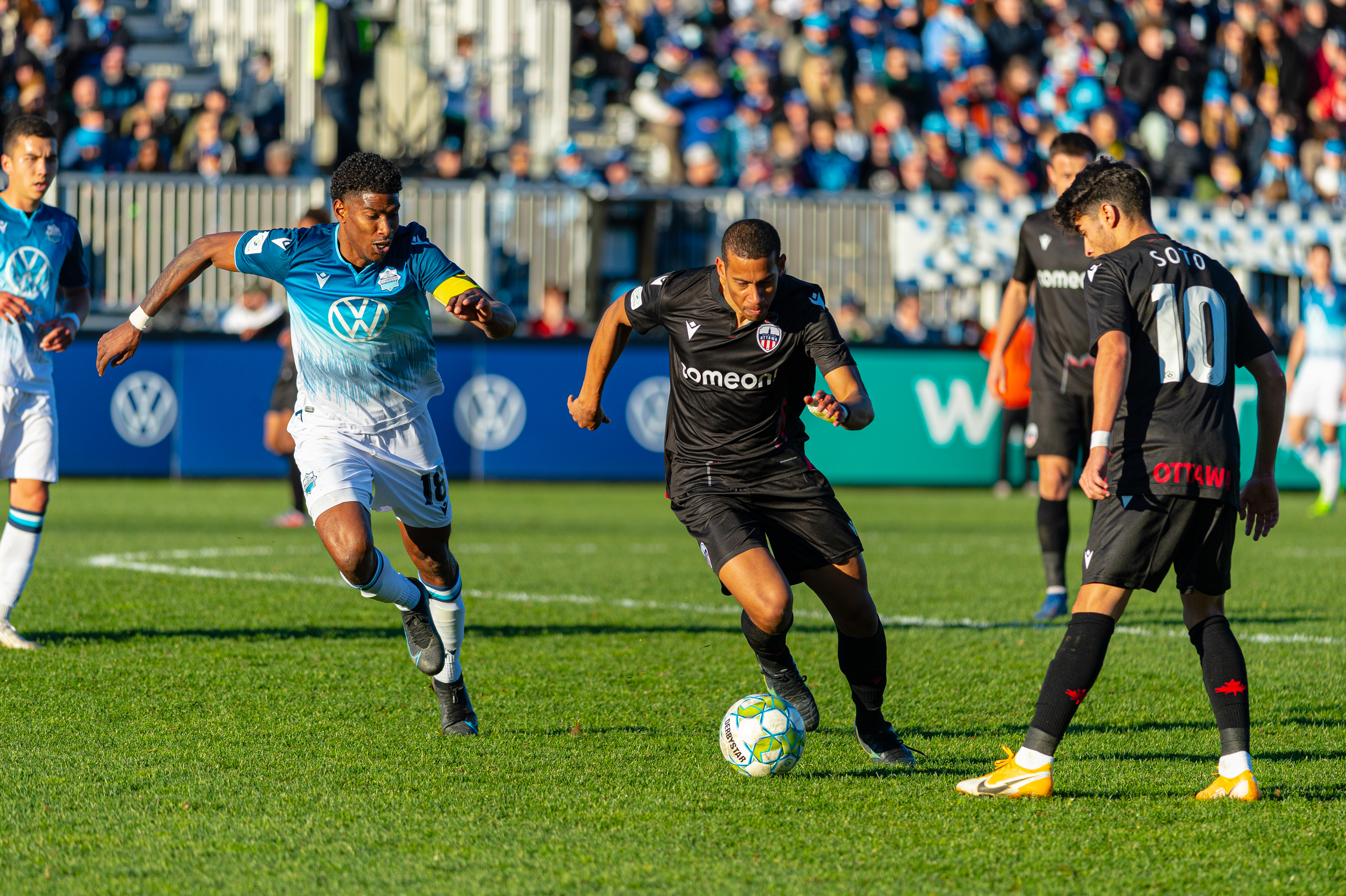 Needing all three points to keep their playoff hopes alive, HFX Wanderers drew 1-1 with Atlético Ottawa in Halifax on Sunday afternoon — as both teams’ seasons came to an end. The home side took the lead in the 11th minute, with Samuel Salter taking advantage of an error from Dylon Powley to  convert an easy tap-in. Matthew Arnone tied it up with a header from close range in the second half, before being given a second yellow card during his celebration. Ottawa held on defensively while down a man, and the match would end 1-1.

With the draw on Sunday, HFX Wanderers were officially mathematically eliminated from playoff contention. A win would have seen them jump up into fourth place, with York United still needing to play one regular season game, and anything less would’ve ended their season.

After Valour failed to win yesterday against FC Edmonton, and York United failing to clinch themselves — losing to Forge — HFX were given a lifeline, but they ultimately fell just short.

York United clinched themselves a playoff spot as a result — the first time that The Nine Stripes will be in the playoffs after finishing one spot back in both 2019 (3rd place) and 2020 (5th place).

HFX pushed for the winner on Sunday, but it would never come. Dylon Powley made a huge save in stoppage time to keep out a shot that was destined for the back of the net, and Powley’s counterpart Kieran Baskett headed a shot wide with one of the final touches of the match after coming up for the corner.

“It was difficult for us in the bubble, and then when we came out of the bubble there were a number of games where we should’ve come away with the victory,” reflected head coach Stephen Hart on the season that was. “Through our own fault we allowed teams to tie up the game or whatever. We dropped points at crucial times of the year where we shouldn’t be dropping points.

“The players left everything on the field today, they really played for that victory, and it’s unfortunate that we couldn’t make it happen.”

“Sometimes it’s not meant to be in the end,” said Wanderers captain Andre Rampersad. “I’m impressed with the guys for trying, we kept pushing, and we’re going to be back. For our season as a whole, one of our biggest problems was scoring goals. We were making chances but scoring goals was a problem. It kind of showed today in the end.”

Not fazed by Arnone sending off, Ottawa’s backline holds strong

Moments after scoring the equalizing goal for Atlético Ottawa in the second half, Matthew Arnone was shown a second yellow card. After some initial confusion for many, it was explained by fellow Ottawa centre-back Drew Beckie that Arnone was booked for “excessive celebration” — Arnone appeared to damage the corner flag after kicking it during the celebration.

Now down a player, and with HFX already on the front foot for the most part to that point, Ottawa had a tough task in order to grind out a result in their final match of the season, but they stepped up as a unit.

Drew Beckie in particular stood out for Ottawa, making three tackles, seven clearances and three interceptions. Zach Verhoven led the team with five interceptions in another strong performance on the right side of a back five.

“It was really, really hard to see in the second half — the sun was just coming over the trees in the background there,” Beckie said of another difficulty that his side faced. “Obviously when you go down to ten men, you still want to play, and I thought we had some good performances in the midfield from (Alberto) Soto and Ben (McKendry) won a lot of balls.

“Zach (Verhoven) isn’t normally a right back, Miguel (Acosta) has been solid all year, (Ryan) Telfer had a great game, Malcolm (Shaw) was good. We’ll take it. Obviously we want to play a bit better and maybe not give up that goal early.”

Morelli gets his chances, but Ottawa keep him off the scoresheet

Joao Morelli has terrorized Atlético Ottawa in 2021, scoring eight goals in five matches against them this season entering Sunday’s match. He was a central figure again in this one, testing Ottawa goalkeeper Dylon Powley on multiple occasions.

The Brazilian hit the target with the first shot of the match five minutes in, forcing Powley to make a safe at the bottom left corner of the net. Later in the half, he also let a shot fly from outside the 18-yard box that had to be saved, before doing the same with a long shot in the 64th minute.

He also fired another second half shot wide of the goal, as Ottawa kept him off the scoresheet for just the second time in six attempts — to go along with one chance created, and winning four fouls.

Scoring half of his team’s league goals in 2021 (14 of 28), Morelli leads the Golden Boot race in the CPL. His 14 goals are three more than Easton Ongaro’s 11, although Ongaro’s Eddies still have one more game left to play.

Beckie was the leader in a strong performance from the Ottawa backline, especially after going down a man.

With the draw, both teams have now completed their 2021 seasons. There are still teams around the league yet to complete their regular seasons, and the CPL playoffs are rapidly approaching. Watch all matches live on OneSoccer. In addition to its website and app, OneSoccer is now available on TELUS channel 980 and on Fubo TV. Call your local cable provider to ask for OneSoccer today.