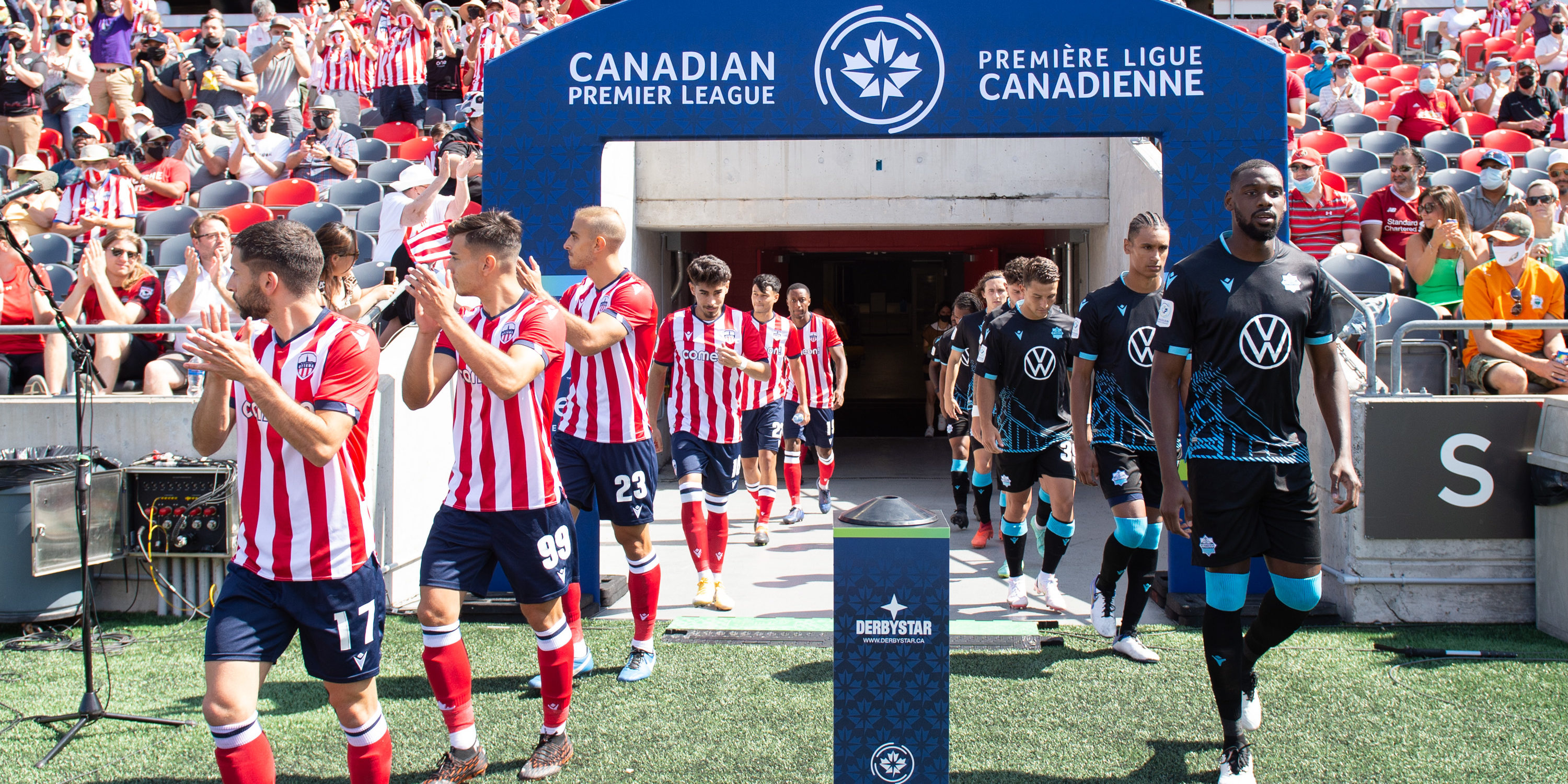 At long last, Atlético Ottawa played their first-ever home game at TD Place on Saturday afternoon, coming from behind to beat HFX Wanderers 2-1 — the same scoreline HFX won by the last time these teams met on August 2.

Akeem Garcia gave the visitors the lead from the penalty spot with his first goal of the season in the 12th minute, but a header from a set piece — scored by Malcolm Shaw — equalized for Ottawa just before halftime. Brian Wright, who replaced Shaw off the bench in the second half, scored the winner with a tidy chip over a rushing Christian Oxner in the 87th minute.

It was a deserved win for Ottawa, who were also in need of three points after losing three straight coming into this home debut.

Atlético Ottawa sold out all of the available tickets at TD Place for Saturday’s match, and announced an attendance of 12,064 people.

The club ran a popular “pay what you want” campaign to get as many people into the stadium as possible, and it proved to be very effective. The crowd was loud — especially after the two Ottawa goals — and the support was felt by their team.

“I think playing in front of our families and friends was incredible,” said head coach Mista after the match. “I hope this is just the beginning and I hope we can get more victories, because today was incredible. Now we’re going to continue working, because this Wednesday we have another difficult game against York.”

The support pushed Atlético Ottawa onto victory in professional soccer’s return to the city.

“The fans were immense,” said Malcolm Shaw, scorer of the first-ever Atlético Ottawa goal at TD Place . “We needed those fans behind us, it was great to finally have our first home game. It was a massive boost for us to hear the cheering and chanting and support.”

Alberto Soto stands out in midfield

With two members of the “M&M&M” midfield absent for Atlético Ottawa in this match — Chris Mannella missed out through injury and Viti Martinez was suspended — 20-year-old Alberto Soto played alongside Ben McKendry in the middle of the park.

On loan from Atlético Madrid, Soto is usually more of an attack-minded player, but instead played deeper behind attacking midfielder Raúl Uche.

He didn’t look out of place at all, however, and was crucial to Ottawa’s success on Saturday. The youngster completed 50 of his 58 attempted passes (86.2%), with a team-leading 35 of them coming in the opposition’s half of the pitch.

Overall, it was a fantastic all-around performance from a player in a somewhat unusual role — and a performance that pleased his head coach.

“Soto’s a great player, but he needs to stay in contact with the ball than the other guys,” said Mista. “I think this is the first time he played more as a midfielder, but he has enough quality to play there.

“When Soto has the ball, things happen on the field, and that’s exactly what happened today.”

After winning the Golden Boot last year, Akeem Garcia went 10 matches without a goal to start his 2021 Canadian Premier League campaign, but scored the opening goal for his side in match number eleven.

Garcia has been working hard, but didn’t seem to be taking advantage of opportunities to shoot like he did so well in his first two CPL seasons. It seemed as though a first goal would open the floodgates a bit, and while that remains to be seen, he scored his first of the season from the penalty spot 12 minutes into the game on Saturday.

Winning a penalty after capitalizing on an error from former teammate Matthew Arnone, and being dragged down in the penalty area by goalkeeper Dylon Powley, Garcia stepped up and placed his spot kick into the back of the net.

“He wanted to take the penalty, and he took it well,” said HFX Wanderers head coach Stephen Hart after the match. “We all know we want him to get going, we’re all behind him.

“He’s been making the runs, he’s been working hard, so we support him. I don’t really care who scores, but want to see him put the work in for the team.”

Alberto Soto controlled the Atlético Ottawa midfield on Saturday by calling for the ball, dropping deeper to defend, and connecting his passes in a strong all-around performance.

Atlético Ottawa are back at home for a match with York United on Wednesday, August 18th (8 pm ET). HFX Wanderers focus their attention on the Canadian Championship, as they host Première Ligue de soccer du Québec (PLSQ) side A.S. Blainville on Tuesday, August 17th (7:30 pm AT/ 6:30 pm ET). Watch all matches live on OneSoccer.