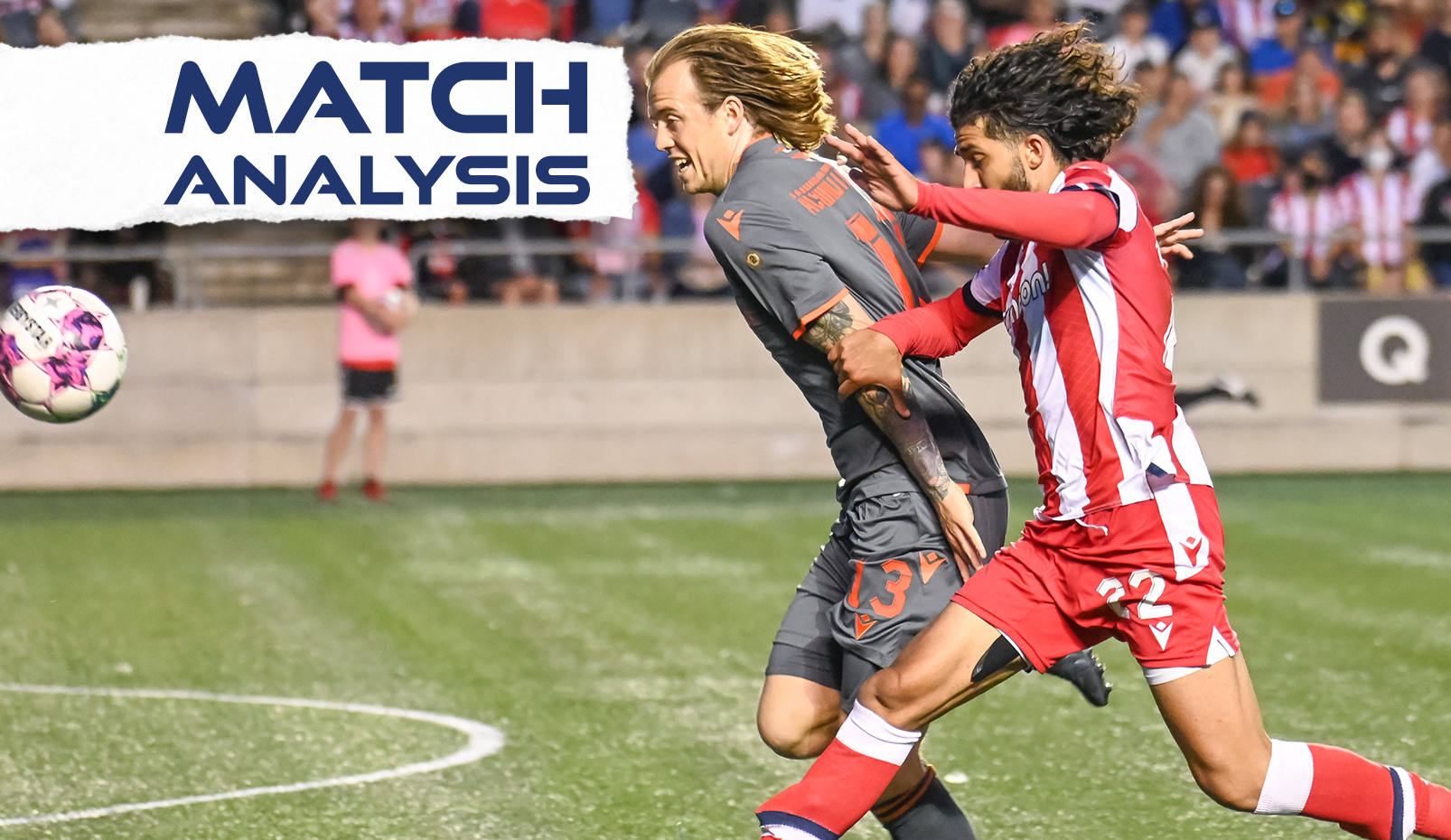 Atlético Ottawa remains at the top of the Canadian Premier League table after a 0-0 draw with Forge FC at TD Place Stadium. Ottawa and Forge managed just two and one shots on target respectively as both teams settled for a point in a disciplined match between two quality sides.

The draw drops Forge into third place for the time being after Cavalry beat York United earlier today to move up into second, but still have two games in hand over both Ottawa and Cavalry.

After not scoring a goal, or picking up a single point against Forge prior to this year, this was the third time in the four meetings against Forge in 2022 that Ottawa was able to get a result, demonstrating the progress they have made this year.

After Forge had come into town and routed Ottawa 4-0 a month ago, it is no surprise that the match started in a rather cautious fashion. While they enjoyed the vast majority of the ball in the early going, Forge also appeared careful in possession, knowing how dangerous Ottawa is in counter-attacking situations.

The roles flipped at times as the match went on, as Ottawa enjoyed more of the ball than they have in recent matches, especially against Forge, but the mentality of both teams did not. What resulted was a match that felt in many ways like a cup final, with neither team wanting to make a costly error.

Neither team recorded a “big chance” during the match, there were only three shots on target in total between both sides, and Ottawa managed just 0.61 expected goals to Forge’s meagre 0.23. On the road, and having dropped two straight coming into this match, Forge in particular were careful not to chase too much late in the match.

“As time went on the one thing we knew is that we needed at least a point,” said Forge FC Head Coach Bobby Smyrniotis. “Two games ago we were in Calgary and we lost a valuable point on the last play of the game. You put that in the bank right now and things are a lot better [for us]. You always have to think that way, we are a team that is progressive, we want to look forward, and we want to win. We always want three points. But sometimes you have to be a little bit smart about the game and I think that’s what both teams were today.”

Atleti coach Carlos González agreed with this assessment, as both sides understood the importance of getting a result out of this match.

“It looked like a playoff game. It was a game of details, of respect,” he said. “I felt in certain moments that they didn’t want to go very freshly to the attack and also in the same way we wanted to attack but also thinking in defence. I think that both of the teams had this mentality today in the field.”

While this is the last regular season meeting between the two sides this year, González might get to see what a playoff game against Forge looks like for real as the result put both sides one step closer to what would be a very entertaining post-season matchup.

The defensive ability of Atlético Ottawa has been well-documented over the course of the season as it has become a core part of the philosophy that has helped them climb to the league’s summit. But today, against the league’s best offensive team, they showed further progression in how they can defend and play against top teams in this league.

Ottawa limited Forge to just one shot on target, 0.23 expected goals, and just 13 touches in their box. In fact, they did an outstanding job overall of keeping the Hamilton side away from any of the dangerous areas of the pitch as is demonstrated by Forge’s heatmap below which shows how little time they spent inside the Ottawa penalty area.

But whereas in the past, including last weekend in a 3-0 win over Cavalry, Atlético has managed to limit their opponent’s goalscoring by playing in a low block and ceding possession, Ottawa adopted a far more proactive approach on Saturday night. They held 41.9 per cent of possession and had several long spells in the ball instead of just trying to quickly catch Forge in counterattacking situations.

“Mainly we had more of the ball than other days, so once you have the ball probably they are not going to punish you,” said González. “Secondly, defensively it is true that we conceded less spaces than last game. I think this was one of the main points in the game plan, to not concede big spaces because we know that Forge with spaces they are a team that can kill you because they have great talent and they love to run to those [areas]. So we tried to close the spaces and do a game of control with more ball, with more possession and a controlled game also when we didn’t have the ball without conceding those spaces.”

In fact, as the game wore on it was often Forge, who really struggled to break down Atleti when they were set, who tried to quickly move the ball in transition and got caught by the Ottawa counter-press. While Ottawa was ultimately not able to score a goal, they did have several good attacking sequences that came from controlled possession, not just quickly moving the ball in transition.

The emergence of Keven Aleman looks like it could be a key part of this progression, as his technical ability and quality on the ball naturally meshed very well with Ballou Tabla and Max Tissot down the left side of Ottawa’s attack. Here is a look at the combination play from the three players (Aleman is #7, Tabla #13, Tissot #15) down the left flank during the match, which resulted in a few of Ottawa’s best chances.

Forge avoid dropping three straight, but still feel like they are playing at “50 per cent”

After losing matches to Cavalry and York respectively in recent weeks, Forge was very cognizant coming into this match that they were on the verge of making the wrong kind of club history: losing three matches in a row for the first time in club history.

They did enough on Saturday night to avoid that reality but otherwise did not look much like the Forge side that has scored a league-leading 40 times this season. This was the fourth time Forge has been shut out this season, including by Ottawa back on July 3, but in all those matches they had at least been able to create chances.

Today, as aforementioned they managed just 0.23 expected goals, and their only registered shot on target was likely a mishit through ball from well outside the box from Rezart Rama.

“50 per cent of our capacity, that is the easiest way for me to put it in one simple sentence,” said Smyrniotis of his team’s performance after the match.

Captain Kyle Bekker was willing to go a little more in-depth on where he felt the team could improve, especially offensively.

“Those unselfish runs in behind,” he said. “I think we need to do it, we need to be relentless in that. We need to make those forward runs and we need to go in behind, and if you don’t get the ball you have to keep doing it.”

Forge will feel a little unlucky after this match, as a shot unleashed by Bekker from outside box by Bekker in the 74th minute appeared to cross the line after coming down off the crossbar, but was ruled no goal on the field. With that being said, that was perhaps the only real scoring chance they had during the match.

Forge will know they have to improve on their performances quickly, as they head to Winnipeg for a crucial double-header against Valour.

“We know they are a fantastic team and they have a ton to play for still, these are huge games for us and over the course of the season and we know we have to go in there and do the business,” said Bekker.

Sissoko has very quietly been a critical piece of the Ottawa midfield this season. The veteran midfielder was again excellent against Forge, completing a tidy 95 per cent of his passes, including 13 into the final third. He also won the ball back seven times, including twice in the final third.

Forge FC head to IG Field for a critical back-to-back against Valour on Wednesday, August 31 (8:00 p.m. ET) and Sunday, September 2 (2:00 p.m) that could well determine the Winnipeg side’s season. Atlético, meanwhile, remains at home where they will host FC Edmonton on Friday, September 2 (7:00 p.m.).

Watch all matches live on OneSoccer. In addition to its website and app, OneSoccer is now available on TELUS channel 980 and on Fubo TV. Call your local cable provider to ask for OneSoccer today. 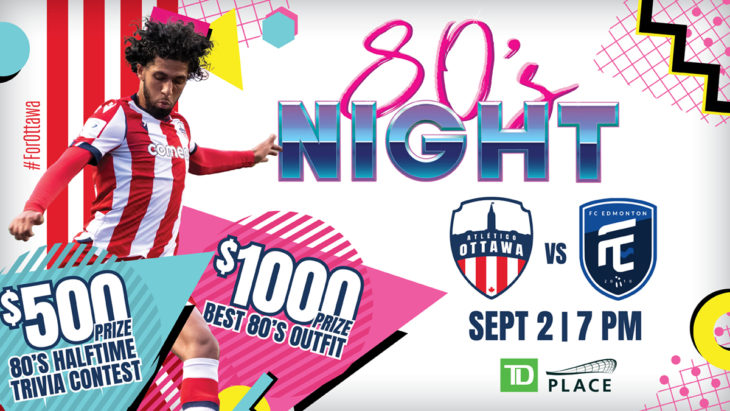