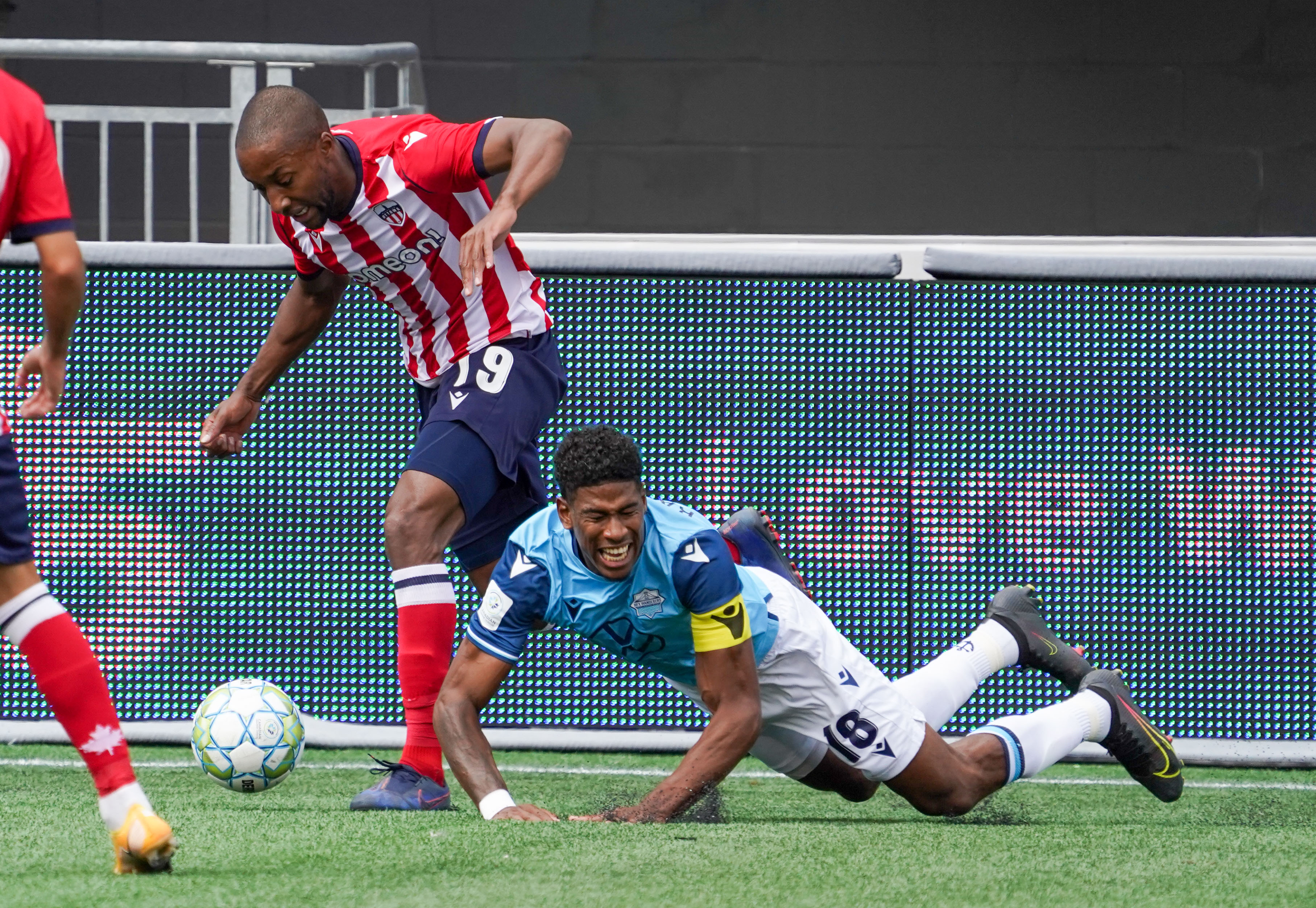 The Gatorade Team of the Week for the 12th week of the Canadian Premier League action in 2021, brought to you by Kristian Jack and OneSoccer’s Oliver Platt.

The Forge #1 may have been on the losing end of the 2-0 game against York United on Saturday afternoon, but individually he was excellent, making key saves from Alvaro Rivero (from the penalty spot), Isaiah Johnston and a brilliant stop, diving to his left, to deny Dominick Zator. Henry also began the week with a clean sheet in Ottawa where he was his usual steady self.

Halifax’s Jake Ruby was close to getting his name in this XI, but N’sa was tremendous for York United in Hamilton on Saturday and gets the nod after making a key clearance off the line late in the game. N’sa operated at right back against a fluid front three, that featured Paolo Sabak as a false nine, and did a great job at denying Joshua Navarro on that flank. The 22-year-old from Montreal remains one of the steadiest defenders in the Canadian Premier League and has been a great addition for York this season.

Another commanding display at the heart of the defence for Didic, in a 3-0 win over Valour, where he led his team in clearances in what was a relatively comfortable night for the Eddies, as they claimed just their second clean sheet since leaving the bubble and fourth this season. The 26-year-old centre-back has formed a good relationship on the right side with the impressive Fraser Aird and with solid professionals around him like Hunter Gorskie and Ramon Soria it is clear that FC Edmonton have a defensive core that is starting to work well together.

York United’s youngsters are getting a lot of love, and quite rightly so, but it is hard to imagine where this team would be without Zator. The 26-year-old was immense for the Nine Stripes at Tim Hortons Field leading his team with a remarkable 12 clearances, showcasing just how good he is at reading the game. Zator doesn’t have bad games but has had two exceptional ones away to Forge FC this season, the first coming when he was originally suspended for that clash in August, and now another where he has led the team to two clean sheets inside the home of the champions.

A second successive appearance in the Gatorade Team of the Week is a reward for another stellar showing for the runaway leading candidate for the U21 Player of the Year award in 2021. Ferrari scored another spectacular goal that got the headlines but his directness and ability to provide pinpoint crosses into the penalty box has given Jimmy Brennan’s side another element to their attack. Brennan cannot praise the 21-year-old enough: “I’ve known Max since he was a kid. He’s got one goal, he wants to be a professional footballer… He’s willing to learn. The way he plays with that energy, that enthusiasm, is the way he trains. For me as a manager it’s amazing to see, and those are the type of players that you want. To see him improve, and how far he’s come along, and he’s grasping that opportunity, it’s amazing.”

Cisse played both games this week, combining for an expected total of 180 minutes again, while leading his team in tackles in both games. The Senegalese midfielder continued his impressive season in the heart of the Forge midfield in both matches, setting up Woobens Pacius for the game’s only goal in Ottawa, and again shining, this team in defeat, on Saturday. Cisse was brilliant against York United, winning possession 10 times but also restricting York to regularly restart or re-evaluate attacks by pressing central midfielders into mistakes.

Aparicio played all 180 minutes of Pacific’s two games this past week, having a tremendous impact in wins over both FC Edmonton and Cavalry FC. Against the Eddies, he was a dominant force, both winning balls and creating attacking opportunities for his teammates. On Thursday, in a key fixture between two sides battling for first place, Aparicio was perhaps even better, leading his team again in duels but also looking to attack the goal.

The 25-year-old was rewarded for that instinct late in the game at Starlight Stadium, when he cut in from the left flank and unleashed an incredible strike to make it 3-1 and put the game to bed for Pacific (and therefore shoot them into first place in the CPL).

Last night, Manny Aparicio 🚀'd @PacificFCCPL to the TOP of the #CanPL standings with this sublime hit, delivering a 3-1 win over @CPLCavalryFC at Starlight Stadium!

The former Seattle Sounders academy player looks to be a real find for Alan Koch’s team who needed more attacking weapons. The 20-year-old, making just his third start for the Eddies since signing last month, had a goal and two assists in a dominating 3-0 win over Valour FC, where his work on the left side was one of the key ingredients to the victory with a superbly-finished goal and get two impressive assists. Gonzalez also had six shots and four key passes, with a 91.7% pass accuracy, on a tremendous night where he shone brightest in a team that played very well across the board.

Morelli already had the most goals heading into the weekend but his late strike to win the game in Ottawa will strengthen his claims to be the 2021 MVP by season’s end. Always the team player, the Brazilian was given his favourite number 10 position to play, just behind Cory Bent as a lone striker, and he flourished with his third brace in his last three matches. Morelli’s role was very much to be the creative force trying to set up his teammates, rather than looking to get on the end of those chances himself. Since coming to the CPL, Morelli has had a few chances to play in that number 10 spot — which he has explained is his natural position — and it’s always been fascinating when he has had those opportunities to watch how he arrives late into the penalty box, as he did to fire a left-footed winner in the 89th minute. For more on how he thrives arriving late to score, watch this analysis from One Soccer, but before you do just admire this strike.

Who else but JOAO MORELLI, who scores his 11th of the season to give @HFXWanderersFC a 2-1 lead over @AtletiOttawa in the 89th minute! 🤩#CanPL 🇨🇦 | 🔴 https://t.co/hishXepRT3 pic.twitter.com/OmSTaLUi6d

Every defender knows they have been in a real game when they play against the German. Against Valour he showed different aspects of his game, working well wide where he can win key duels and maintain key second ball opportunities for his team, and in addition also be a real threat in a central area where he was rewarded with a fine goal, combining with Gonzalez to supply a volleyed finish himself.

After scoring his seventh goal of the season on Saturday, One Soccer asked if Shaw was the quietest goalscoring threat in the league and it is a really good question. Lost in what has been a difficult season in the nation’s capital has been Shaw’s ability to come alive in the penalty area, show terrific calmness and showcase his finishing ability with either feet. The 26-year-old from Toronto now has six goals in his last 10 matches with very few opportunities coming his way.