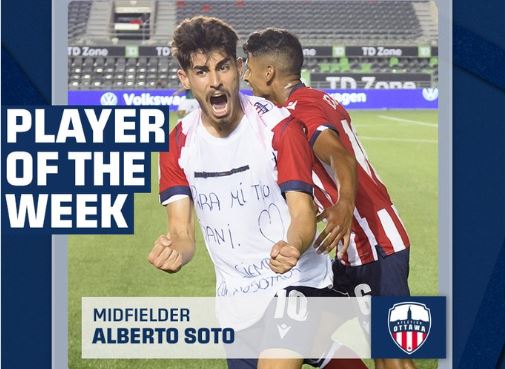 Atlético Ottawa midfielder Alberto Soto has been named CanPL.ca Player of the Week following a stellar performance in his first two home matches, including the club’s long-awaited homecoming to TD Place.

Soto, 20, opened his home assist Ottawa account on Saturday against HFX Wanderers FC in front of 12,000+ fans with a lovely pass that led to a Brian Wright winner, only to follow that up with an epic 89th-minute strike to draw level against York United on Wednesday. Soto attempted five shots against York (two hitting the target) and completed 54 of his 60 passes, 45 of which were in the attacking half of the pitch.

The goal and assist gifted Ottawa back-to-back results at home, capping a dramatic turn of fortunes for Mista’s side as they begin a slow ascent from the bottom of the CanPL table.

Soto is on loan from Ottawa’s parent club Atlético Madrid and is the first Ottleti player to earn player of the week honours and joins Cavalry FC’s David Norman Jr. and Daan Klomp, Valour FC’s Jonathan Sirois and Andrew Jean-Baptiste, and Forge FC’s Kyle Bekker as past winners in the 2021 season.

A maestro in midfield – @atletiOttawa's @Albertoosoto10 is the #CanPL POTW 🇪🇸