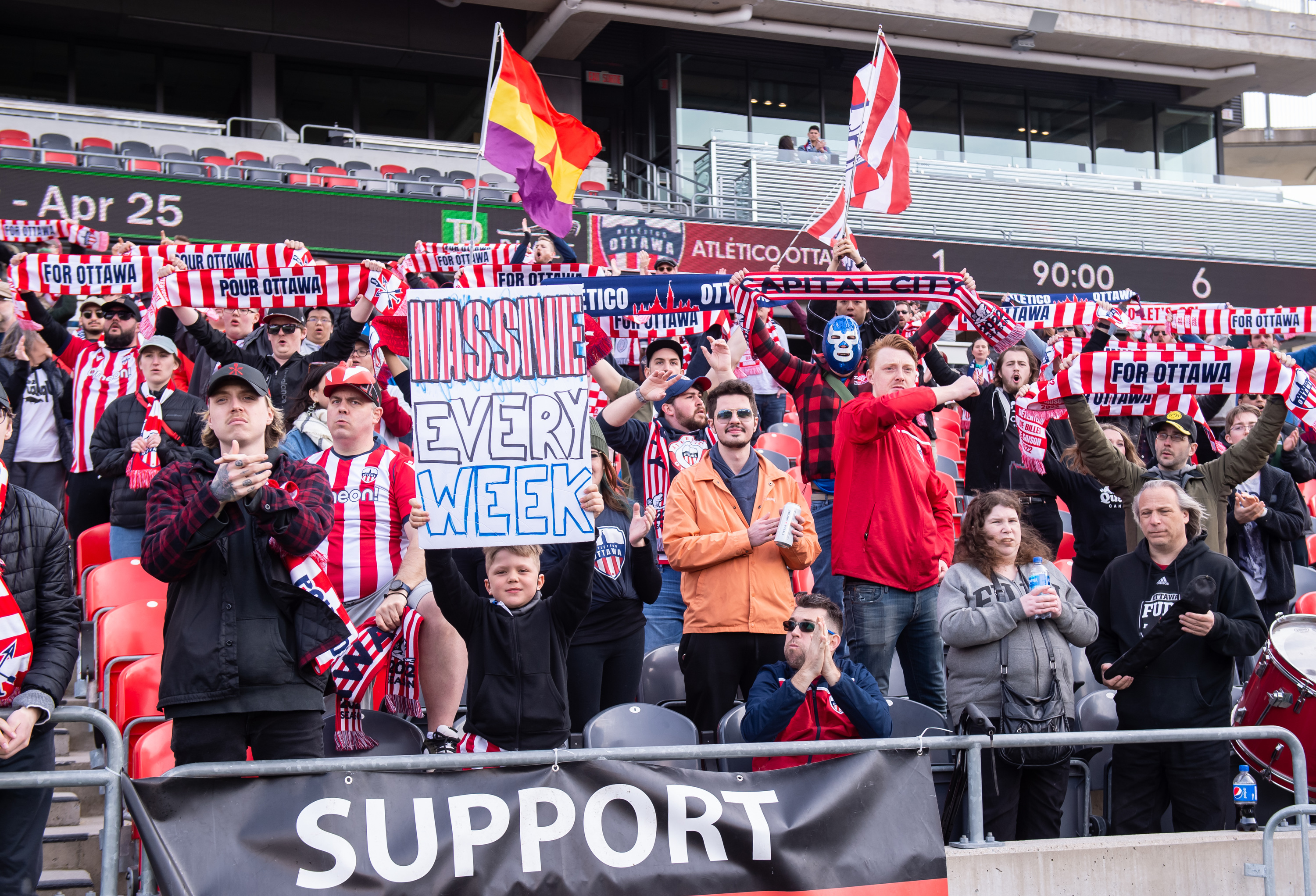 As head coach Carlos González would say, Atlético Ottawa have ‘shown a new face’ this season. Results are improving after two turbulent campaigns but, once again, the stand-out performers can be found in the stands.

If you’ve visited TD Place to see Atlético Ottawa play this season, we don’t need to tell you about the electric atmosphere created by the home fans – but let’s talk about it anyway.

Whether it’s a dreary Tuesday night or a radiant Saturday afternoon ‘the Dub’ (the name given by the supporters to their section – ‘W’) has been intoxicating so far in 2022. The rowdy crowd roars their chants after the National Anthem has been sung and they do not stop until long after the final whistle as Atleti’s dedicated and passionate fan base remains behind to serenade the players.

Soccer is a game of tension; a low-scoring team sport that can be decided in a single moment. This tension, this feeling of anticipation is never more apparent than when a crowd connects with the team they are watching – it’s a cornerstone of why the game is considered so ‘beautiful’.

“Since time and memorial, football’s life blood has been its supporters. Their passion for the beautiful game is unprecedented in all of sport,” explained Daniel Duff, President and Founder of the Capital City Supporters Group (CCSG). “We have, and continue to grow our group with the same passion and enthusiasm you find across the pond.

“The Dub is electric because we have started to see the seeds of an authentic football culture here in the capital. We are just beginning to see the fruits of our labour here in Ottawa.”

As much any other sport, fans influence the outcomes of soccer games. The encouraging lyrics of “Allez, Ottawa” drive the Rojiblancos forward, whilst opposition players are often visibly influenced by the berating they receive from the home team’s faithful (attempting to distract them, even for just a second, to give their side the advantage).

Against the defending Canadian Premier League champions, Zach Verhoven came off the bench to score a late winner, immediately running to the supporters’ section to relish in the moment with them. Having conceded an equalizer only moments earlier, the explosion of emotions within the grounds was palpable.

Verhoven wasn’t alone in his celebrations. Every Atleti player on the pitch – as well as those on the bench – sprinted over to join him. A cry of “Oh my god, it’s happening,” was heard amongst the fans as they rushed from their seats to join in too.

This felt like a monumental moment, a moment that truly symbolized this ever-growing connection for those who support this team, and the feeling isn’t lost on the players either.

“You dream of having moments like that, it’s probably the most memorable goal I’ve ever scored,” said Verhoven. “Being here last year and seeing how the supporters stuck with us in those hard times, I already had a plan that – if I score here I’m going to go and celebrate with the fans.

“I wanted to go to my teammates, but I felt it would be even more special to go to the fans. So, I waved them over; it was a special moment for sure. I loved that.”

Quantifying a ‘feeling’ is a precarious task and often left open to interpretation. Stats, on the other hand, are a little less so.

Close to 50% of The Dub’s capacity is season ticket holders this year, led principally by members of the two supporters groups CCSG and the Bytwon Boys (BBSC). The section itself regularly approaches or sells out tickets on matchday as the average attendance (currently sitting at 3,235) continues to increase with eight home games still to play in 2022 and a strong push for the club’s first playoff finish.

🚨We’re bringing “The Dub” on the road❗️

Join us July 24, as we invite York University Stadium to cheer on @atletiOttawa as they face York

The support this team receives doesn’t start, nor does it end in the stands at TD Place. Watch parties are organized to cheer the team when playing away and, for the first time in the club’s history, the players are going to receive spirited away support – in numbers!

Organized by CCSG, over 50 fans are embarking on a bus to York (travelling there and back in a single day) to help give González’s men that extra push they need to bag three points on the road. At only $100 per head, which includes return transportation and a ticket to the game, Atleti’s dedicated fan base are working tirelessly to make these experiences as accessible as possible, for everyone (a few seats remain available and you can find out more by clicking here).

The Dub is a section to rival the best fans in the Canadian Premier League and their infectious support is spreading. At any given game you’ll hear their famous chants echoed by different groups throughout the stadium, feeding off that energy. “TD Place is electric, and Atlético Ottawa is massive,” says Duff, and it’s hard to argue with him on that.

Our Next Match At Home

Break out your floral shirts, sunglasses and beach towels! Our Beach Party Match is just around the corner! GET TICKETS HERE.
It’s been weeks since our last match at home but on July 9th at TD Place, we take on Cavalry FC but it’s the beach vibes that you’ll be talking about right now…
What you can expect at the match: Beach Party Match Blog